We use cookies to make your experience better. To comply with the new e-Privacy directive, we need to ask for your consent to set the cookies. Learn more.

Follow in the tread marks of some of Australia’s racing greats.

Follow in the tread marks of some of Australia’s racing greats and have your own circuit around Mount Panorama, home to Bathurst 1000, the legendary great race. 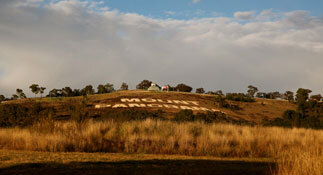 Bathurst is a curiosity. This country circuit is unique. You can’t manufacture the essence of Bathurst – it just works and for nearly half a century the great race has been etched in our national psyche. It’s a fair dinkum Australian tale.
- Russell Crowe

Mount Panorama is a mecca for motor racing enthusiasts from all over Australia and around the world. Its sharp hills, hairpin bends and fast downhill straights make the track one of the most challenging and exhilarating racing circuits often described as a lap of the gods.

Add to that the incredible 360-degree views of the undulating hills of Bathurst. If you can make a getaway here, include a sunrise or sunset spin around the track (yes, you can drive around in your own car), then you will be treated to morning mists and shades of pink and orange that emerge from inky blue mornings with distant hills and golden-coloured plains from plentiful birds eye spots.

Way back, the Mount was an important part of the local Wiradjuri tribe's culture called ‘Waluu', which means ‘to watch over' and it was from the vantage points now known as Skyline and McPhillamy Park that tribal men would keep an eye over the valley.

Now the spiritual home of Australian motorsport, Mount Panorama began as a dirt track carved out of the hills around the bustling city of Bathurst in the mid 1930’s. The mayor at the time, Martin Griffin, had a vision for a premier motor racing circuit that would inspire awe and demand respect from all who took up the challenge for years to come and on 17 March 1938 he declared the Mount Panorama Scenic Drive open. On 16 April of the same year, Mount Panorama attracted some 20,000 spectators to its first race, The Australian Tourist Trophy.

Back then, the drivers were kitted out with gloves, goggles and jacket, but no helmet.

Every year 1000s flock to the ‘The Great Race’ (as we know it) where V8 supercars continue to up the speeds every year around the challenging curves and fast straights. It’s the most demanding track in the country a torturous trek of tarmac over a 6.2km circuit that excites and intimidates those who tackle it over 6.5 hours of tactics and teamwork.

The sheer tenacity of the drivers has borne many racing legends. In 2006, 194,000 spectators turned out not only to witness Craig Lowndes edge out Rick Kelly for his 2nd Bathurst title, but also to farewell one of the best racing car drivers Australia has ever produced - Peter Brock, King of the Mountain.

There will only ever be one Brocky and everyone remembers the excitement of the races where he went panel against panel against Alan Moffat to the roar of the crowds, who loved every minute of the David and Goliath trials.

With heavy hearts Bathurst bade farewell to Peter Brock. His name belongs to a famous line up of great fabled names like Johnson, Richards and Perkins.

Now racing heroes like Jamie Whidcup golden boy, four time winner, Garth Tander, ‘warrior’ Greg Murphy, Russell Ingall or ‘the enforcer’, poster boy James Courtney and ‘Frosty’ (Mark Winterbottom) as well as the Kelly brothers all come back year after year to conquer this bit of road, aiming to stand supreme at the top of the mountain. The spirit of the Mount Panorama brings together racing pilgrims who don’t miss a moment from sausages at sunrise to soaking up the celebrations at the days end of wins or start plotting revenge for the next October. It’s tribal – you are either red or blue, there’s no beige on the mountain.

Want to make a booking?

if your car is due for a service or needs any kinds of mechanical repair, then call us on 13 13 28 to book a service, or here to find your nearest store..

Need to book in with us?